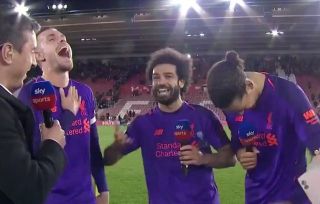 It initially started with Virgil van Dijk and Jordan Henderson who stayed behind to discuss the 3-1 win over the Saints, which lifted the Merseyside giants back into top spot in the Premier League table.

Naturally, having also come from behind to secure all three points, the Liverpool camp would have been in high spirits and that was reflected in Salah’s cameo appearance.

The 26-year-old was initially ushered in by Van Dijk, and immediately arrived with a huge smile on his face as he was delighted to get his goal, his 50th in the Premier League for Liverpool, which also ended a nine-game drought.

He also saw the funny side of it too as he managed to have a cheeky dig at Henderson at the end, insisting that his Liverpool teammate probably ended a 20 or 30 game goal drought of his own with his late effort.

The Liverpool players certainly look as though they’re relishing this title battle now, and they’ll hope that they can continue to pick up victories in the coming weeks and hope that Manchester City drop points along the way as they continue to go for a quadruple, which will surely take its toll on Pep Guardiola’s squad.

"This is special. I'm so happy"

Mo Salah reflects on scoring his 50th Premier League goal for Liverpool as the Reds beat Southampton 3-1 at St Mary's.