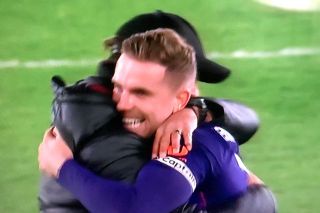 Liverpool captain Jordan Henderson was left out of the starting line-up against Southampton, but he still managed to make a decisive impact.

Jurgen Klopp wasted little time in making changes in the second half against the Saints, as he introduced both Henderson and Milner just before the hour mark.

It proved to be a crucial switch as the captain went on to not only have a key influence on the game as a whole, but he also scored the decisive third goal to wrap up the victory which sent Liverpool back to the top of the Premier League table.

With that in mind, Klopp certainly got it right tactically and provided his side with the lift that they needed at the perfect time, but as noted by Henderson in his comments below, he certainly inspired his captain to make the impact he made with a simple but effective message prior to coming on.

“Make a difference,” he told the club’s official site.

“Use our experience and then make a difference. Help the lads, get them going because we were under a bit of pressure.

“I felt as though we did that coming on, but so did everybody else. We kept going right until the end and we kept fighting and thankfully we managed to score a couple of goals and win the game.”

Those are the kind of changes and moments that can define a title race, and Klopp certainly deserves praise for the way in which he is managing this side this season to keep them in contention with Man City in what is proving to be a fascinating title scrap.

However, the German tactician will certainly need to produce a few more between now and the end of the season to ensure that it’s a successful campaign.