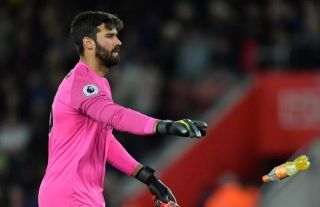 Southampton reportedly face an FA investigation after Liverpool goalkeeper Alisson was spotted removing bottles thrown onto the pitch in his direction.

The incident happened during Liverpool’s 3-1 win over the Saints on Friday night, as they came from behind to secure all three points which moved them back to the top of the Premier League table.

While the home faithful jeered former star Virgil van Dijk every time he touched the ball during the encounter, it would appear as though the Dutchman wasn’t the only one who got a less than friendly welcome at St. Mary’s.

As reported by The Sun, it’s claimed that two plastic bottles were thrown at Alisson while the rest of the Liverpool players were celebrating Jordan Henderson’s win-clinching goal late on.

It’s added that the FA are now likely to look into the matter, and so it remains to be seen whether or not Southampton are hit with disciplinary action, while the club will surely carry out the necessary checks to try and identify who threw the bottles onto the pitch.

Fortunately for Alisson, neither hit him as he merely moved them off the pitch and continued the game, but given the spate of troubles involving fans in recent months, it’s not what the FA want to see, and what fans in general want either.

From Jack Grealish being attacked by a Birmingham City fan who had invaded the pitch to other unsavoury incidents involving supporters getting onto the field, more certainly needs to be done moving forward to ensure the protection and safety of the players from such moronic acts.