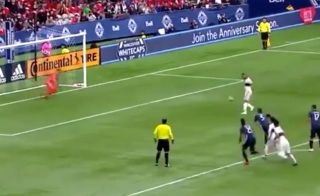 As far as awful penalties go, Ali Adnan’s attempt for the Vancouver Whitecaps against LA Galaxy on Friday was probably the worst of the lot.

Galaxy eventually secured a 2-0 win in their MLS meeting through goals from Daniel Steres and Zlatan Ibrahimovic.

However, it could have been a completely different story had Adnan scored in just the second minute of the encounter from the penalty spot.

As seen in the video below though, the 25-year-old loanee from Udinese decided it would be a good time to try a Panenka, but he got it horribly wrong as it resulted in an easy save for the LA Galaxy goalkeeper.

If he needs footage of someone doing it properly, Ibrahimovic showed how it’s done last week, as seen below, and the Swedish icon undoubtedly would have found the funny side of Adnan’s attempt to replicate such a risky move.

That’s now four wins in their opening five games for Galaxy, while the Whitecaps slipped to their fourth defeat in five outings.

Worst Panenka attemp ever by Ali Adnan of the Vancouver Whitecaps? pic.twitter.com/KwYE0IFhyy

Ali Adnan will feel the heat after #VWFC loss. If he'd scored 2nd minute penalty, instead of embarrassing panenka failure, the game could've been very different. Insane for a left back, who just recently joined on loan and isn't a regular penalty taker, to try that.#VANvLA #MLS pic.twitter.com/DjPItQGpBD

This is Zlatan Ibrahimovic’s world, we’re just living in it. ? #mufc [LA] pic.twitter.com/Sub0bQPGkD