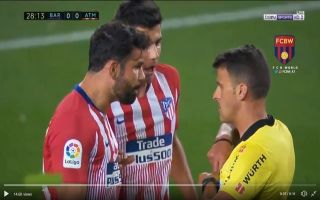 Diego Costa was the centre off attention during the first-half of Barcelona’s highly-anticipated clash vs Atletico Madrid this evening. The star was sent off for doing this.

Costa did what he does best and caused drama in the 27th minute of the match, the former Chelsea star confronted the referee after Luis Suarez drew a foul for Barcelona.

Costa was absolutely livid with the referee’s decision to blow for a foul and the Spaniard was very aggressive towards the referee – which left the ref with no choice but to send him off.

Diego Costa has been shown a red card!

Atletico Madrid are down to 10 men against Barcelona ?#BarcaAtleti pic.twitter.com/dPPhCylOwW

According to Spanish news website 20minutos, Costa told the referee “I shit on your f**king mother”. Costa could face an extended ban if this is found to be true.

Atletico will have the odds stacked against them even more now that Costa has got himself sent off, I’d be surprised if Barcelona fail to get the best of a 10-man Atleti.