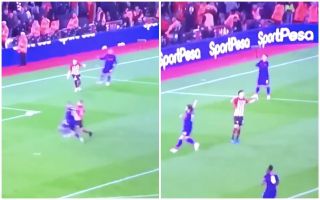 Liverpool forward Roberto Firmino produced a quality assist for Jordan Henderson in their win over Southampton, and he looked as though he enjoyed it.

The Brazilian ace raced onto a long ball played over the top and after creating space for himself with some lovely skill on the ball, he produced a perfect pass into the path of Henderson who bagged Liverpool’s third goal of the night.

Their 3-1 win over the Saints moved them back into top spot in the Premier League table, and the celebrations after this goal showed that they are certainly relishing the title race as they continue to go head-to-head with rivals Manchester City.

However, there was a more light-hearted moment too as Henderson showed raw passion with his celebration, as the video below shows Firmino’s hilarious reaction to his assist as he seemingly stands and admires his work while his teammates race to the away end.

The eagle-eyed Liverpool fans below all spotted it and were absolutely loving it, as they should as their side continue their march towards the Premier League title with Firmino going about his business in quiet but classy fashion, even when it comes to his celebrations.

And Firmino’s celebration as well ??

Name someone better at celebrations than bobby firmino. I’ll wait… because there is no one.

I LIVE FOR FIRMINO CELEBRATIONS.

That Firmino celebration when Henderson scored ?