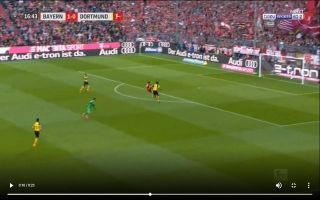 Bayern Munich striker Robert Lewandowski scored an insane goal for Bayern vs Dortmund today, the acrobatic strike was the star’s 200th goal in the Bundesliga.

In the 17th minute of the all-important Bundesliga clash, Lewandowski dealt a crucial blow to his former side by first flicking the ball over goalkeeper Roman Burki before bicycle kicking the ball into the back of the net.

To make matters worse for Dortmund fans, the scoring was opened by another one of their former stars – Mats Hummels.

Bayern double their lead against Dortmund!

Robert Lewandowski takes advantage of a terrible error at the back ?

GOOOOOOOOOOOOOAL, Lewandowski, what a goal ????????

With Bayern winning today’s game, Dortmund’s chances of winning the title have taken a massive hit.