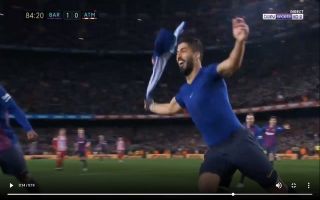 Barcelona sealed a win against Atletico Madrid thanks to superstars Luis Suarez and Lionel Messi, the pair scored within a minute of each other.

Suarez got the decisive goal for Ernesto Valverde’s side in the 85th minute of the clash, the former Liverpool star curled in a beautiful shot from outside the box that pinged into the bottom corner. It takes some strike for Jan Oblak to be beaten.

Messi doubled the Blaugrana’s lead just a minute after, the five-time Ballon d’Or winner was on the end of a Barcelona counter-attack. The tricky Argentine drifted in from the right-wing, and managed to reclaim the ball after being tackled.

Messi made some space for himself before firing a fine finish into the bottom corner, Oblak had no chance of stopping this.

A goal worthy of winning this match for Barcelona! pic.twitter.com/BeoQQb0AFn

Two in two minutes for Barcelona!

And obviously, it's Lionel Messi who gets on the scoresheet… #BarcaAtleti pic.twitter.com/SAN3CbQnVW

Barcelona will be turning their attention to their Champions League Quarter-final against Manchester United on Wednesday night.