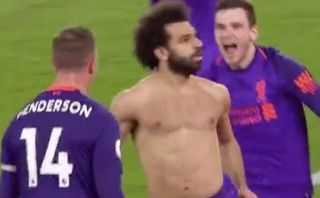 Liverpool secured a 3-1 win over Southampton on Friday night, with Mohamed Salah getting on the scoresheet to send them back to the top of the Premier League table.

As noted in the club’s tweet below, it was the Egyptian international’s 50th Premier League goal for the Merseyside giants, and he created club history as he reached the landmark in the fastest time of any player after just 69 games.

Having also ended a mini goal drought, his strike couldn’t have come at a better time with the Reds toiling at times against Southampton, knowing that a win would see them leapfrog title rivals Manchester City back into top spot to pile the pressure back on Pep Guardiola’s side to respond.

However, he wasn’t finished there as seen in the video below, as Salah hilariously drops a shoulder and nonchalantly evades Andy Robertson and Jordan Henderson who fall into each other’s arms following the dummy from their talisman.

No wonder Salah’s a nightmare to mark with this kind of movement to get away from players, but it certainly looks as though the entire team enjoyed the goal as they continue their march towards the Premier League title this season.

? Games taken to net 50 @premierleague goals for the Reds…