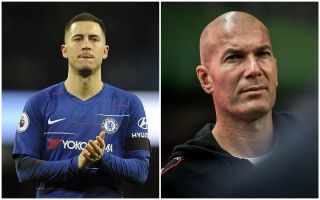 Real Madrid boss Zinedine Zidane has revealed that Eden Hazard is a player that he has “always appreciated” and has labelled him “fantastic” amid growing speculation of a move from Chelsea.

As noted by Marca, it has been suggested that an agreement between the three parties is expected in ‘the coming days’, and so Hazard appears to be edging ever closer to a switch to the Bernabeu.

Time will tell how accurate that timeline is, but one thing is for certain and that is speculation over a Chelsea exit has refused to go away for months now.

Real Madrid are currently in the middle of a desperately disappointing campaign which they are likely to end empty-handed, as they currently trail La Liga leaders Barcelona by 13 points with just eight games to go while they have already crashed out of the Champions League and Copa del Rey.

With that in mind they are being tipped to have a major spending spree this summer, with AS previously suggesting that they have put aside €500m to try and sign Hazard, Kylian Mbappe and Paul Pogba.

It remains to be seen if all three arrive in one transfer window, but Zidane seemingly teased a move for Hazard as he publicly revealed his admiration for the Belgian international.

“He’s a player I have always appreciated. He is fantastic,” he is quoted as telling the media on Friday by BBC Sport.

“I will not give my personal opinion about what may happen because the season has not ended.

“He has played in France, I have watched him a lot and I know him personally.”

While he did stop short of suggesting that Real Madrid will launch a bid for Hazard, that does little to stop the speculation of a move to the Spanish capital this summer.

However, considering Chelsea are looking to appeal their transfer ban, they will surely be desperate to hold onto Hazard if they are unable to sign a replacement for him.

That is of course unless Christian Pulisic is expected to fill the void, with the club having already officially announced his arrival in the summer back in January, as noted by BBC Sport.