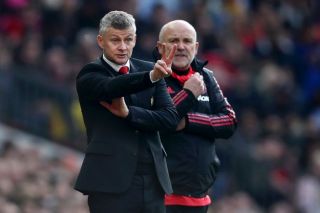 Man Utd have seemingly found a successful formula with their current coaching set-up, but Mike Phelan reportedly might not be a long-term fixture in it.

The Red Devils appointed Ole Gunnar Solskjaer as their permanent boss last month, with the decision coming after he had enjoyed a stellar stint in charge on an interim basis.

The Norwegian tactician has led United to 15 wins in 21 games in charge, although they have stumbled in recent weeks having suffered three losses in their last four outings across all competitions.

That in turn will raise concerns, but they’ll hope to put that behind them when they face Barcelona in the first leg of their Champions League quarter-final tie on Wednesday night.

However, there is also a worrying issue brewing off the pitch too according to the Daily Mail, as they suggest that Phelan is still considering his future at Man Utd, as he is reportedly unhappy with the current management structure at the club.

It’s suggested that he believes there are too many people involved at that level of the club, and wants to have a more straight-forward set-up if he is to commit his future.

Given the success that he was involved in during Sir Alex Ferguson’s trophy-laden spell in charge of the Premier League giants, he undoubtedly knows what is required to get United back to the level that they were at previously.

That has arguably been one of the major themes of Solskjaer’s spell thus far, as it has been focused around returning to the culture and atmosphere that was built under Ferguson, which has seemingly been lost since his exit under the likes of Louis van Gaal and Jose Mourinho.

Phelan is undoubtedly a key figure for the club with the experience and knowledge that he brings to the table, with the report even suggesting that he could yet even land a more prominent role beyond his coaching duties too.