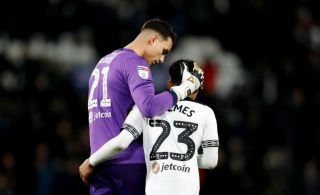 There seems to be a real crisis in English football and elsewhere in Europe at the moment with a worrying rise of racially charged insults and jeers aimed at footballers.

MORE: Video: Mason Bennett scores one of the most insane goals you’ll see for Derby vs Wigan

Raheem Sterling was racially abused by a Chelsea fan at Stamford Bridge earlier in the season, while a number of England players were recently subjected to monkey chants in an away game at Montenegro.

Holmes is the latest to be targeted by racist thugs, while this report from the Sun mentions other horrific insults sent the way of some black footballers on social media.

Speaking about the Holmes incident, Derby boss Frank Lampard said: “Duane Holmes was abused at close quarters at the side of the dugout when Brentford scored their third goal.

“It has been reported, the man who was accused has been taken by the police.

“Duane’s upset. There’s no place for it in life, not just in football. Brentford staff apologised at the end but it needs to be dealt with.”