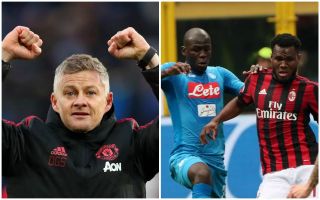 Manchester United manager Ole Gunnar Solskjaer looks set to be trusted with what may well be the club’s biggest spending spree in the transfer market this summer.

The Norwegian tactician was recently confirmed as the Red Devils’ new permanent manager, having impressed hugely since he replaced Jose Mourinho back in December.

This now seems set to earn him plenty of control over the running of the United team, with £100million-rated Napoli defender Kalidou Koulibaly a prime target in a potential £200m spending spree this summer, according to the Evening Standard.

The Senegal international has been world class for Napoli and the report states United are aware they may need to do what Liverpool did with Virgil van Dijk and spend big to fix their defence.

The report also explains that Solskjaer has been encouraged by United chief Ed Woodward, who seems ready to back him in the transfer market, both in terms of money and in terms of helping the former Molde boss build a squad in his own image.

Koulibaly would be a great player to start with, and the piece also suggests the likes of Raphael Varane, Saul Niguez and Bruno Fernandes could be on the agenda.