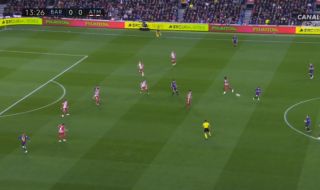 Lionel Messi was at his best again yesterday evening as Barcelona won 2-0 against Atletico Madrid in their La Liga clash at the Nou Camp.

Not only did the Argentine score a delightful goal late on to seal the victory, but he was also doing bits all over the pitch throughout.

This video clip above was perhaps his most exciting moment, as he picked up the ball in midfield and played a sublime lobbed through ball into Jordi Alba, who’d made a great run forward from left-back.

The Spaniard was then unlucky to hit the post, though, to be fair, maybe he wasn’t expecting Messi’s vision and delivery to actually be that good.