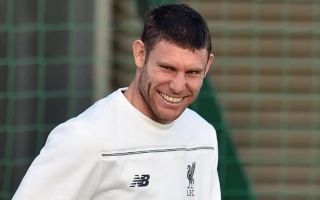 Fast food giants Burger King sent Liverpool fans into meltdown when they replied to a Burger King lover’s tweet with a bizarre bit of praise for the Reds midfielder.

Burger King receive spades of praise from their Whopper loving fans and when Twitter user @abbie_muirhead took to the social media platform to reveal that Burger King was ‘underrated’ – the fast food restaurant responded in bizarre fashion by replying with “so is James Milner”.

The former England international has once again been a key player for Jurgen Klopp’s side this season, and has generally spent his career going about things in a no-nonsense way, whilst always being something of an unsung hero for every team he’s been with.

Burger King will no doubt become more popular with Liverpool fans after this.

I see you’re a man of taste

we’ve conquered all of fast food

Burger King confirmed as my takeaway of choice from now on

It’s very nice to see that Milner is finally getting the praise he deserves, although we have to admit we never thought it would come from Burger King.