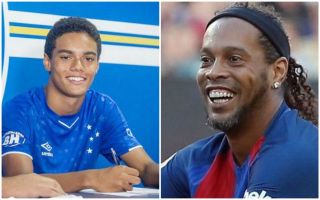 Barcelona legend Ronaldinho’s 14-year-old son has just signed his first contract with Brazilian club Cruzeiro as he looks to follow in his father’s footsteps.

At the peak of his powers, Ronaldinho was one of the best footballers on the planet, and remains fondly remembered for his superbly entertaining playing style full of tricks and flair.

If his son Joao Mendes can come anywhere near matching his dad he’ll have a great career, and it looks like he’s done enough to impress Cruzeiro after a trial period during which it was claimed he hid his identity so as not to influence the club’s decision, according to Brazilian source Globo Esporte.

The teenager can now hope to continue his development and make an impression at Cruzeiro before perhaps one day earning a move to Europe.

Scouts from big clubs will no doubt have an eye on Mendes in the hope that he can emulate his father, so it will be interesting to see if this can be the start of a great story for the player.

His contract has been announced by Cruzeiro’s official site.