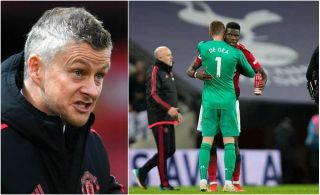 Various recent reports have linked Pogba with Real Madrid, with OkDiario among the most recent to state the France international had snubbed talks over a new contract with United in a bid to get a move to the Bernabeu.

However, the latest from the Daily Mirror is that new Red Devils manager Solskjaer has told Pogba quite simply that he won’t be leaving.

The report goes on to explain that a transfer priority for the club this summer is to ensure star duo Pogba and goalkeeper David de Gea stay in Manchester.

It would certainly be a big blow for Solskjaer now, after such a fine start at United, to lose two such important players and have to rebuild once again.

MUFC have gone through many changes since Sir Alex Ferguson retired in 2013, but look as settled as ever this season after Solskjaer replaced the struggling Jose Mourinho back in December.

This has coincided with some of Pogba’s best form in a United shirt, and they’ll surely now want to build a team around the 26-year-old for years to come.