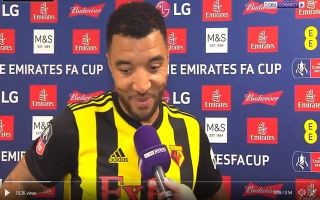 Watford completed a miraculous comeback against Wolves earlier today thanks to a spectacular double from super sub Gerard Deulofeu and a late penalty from skipper Deeney.

Deeney had the weight of Watford’s entire club on his shoulders when he stepped up to take a penalty during injury-time, the Birmingham born striker continued his excellent form from the spot and netted a last-gasp equaliser for the Hornets to send the tie into extra time.

Deeney was questioned about Raul Jimenez’s decision to celebrate by putting on a mask, the Mexican star made it 2-0 to Wolves in the 62nd minute of the tie.

Check out Deeney’s take on Jimenez’s celebration below, fair to say he wasn’t too happy:

Fortunately for Jimenez, both sets of players and especially the referees – Deeney didn’t notice Jimenez’s antics during the match and only realised after the game.

Deeney certainly would have had a ‘few words’ with Jimenez if he noticed his celebration after the goal.

Watford have the mammoth task of facing Manchester City in the final of the competition.