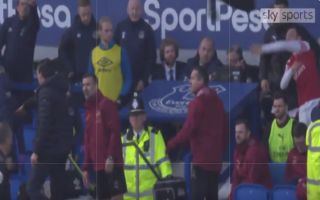 Mesut Ozil appeared to throw his jacket at Arsenal manager Unai Emery, after he was subbed off during the Gunners 1-0 loss to Everton on Sunday.

The north London side lost the game in hand they had on their rivals in the race for the top four, as a Phil Jagielka strike in the first half condemned Unai Emery’s side to their seventh league defeat of the season.

Comfortably the best moment of the entire game which pretty much says it all. pic.twitter.com/yC0YLtuj1O

The match wasn’t one filled with controversy, however one moment from Ozil did leave a lot of fans with talking points after the game.

As the game edged closer to the 85th minute, Ozil appeared to throw his jack at manager Emery, just 10 minutes after being taken off by the Spaniard for Alex Iwobi.

This action from Ozil is very shocking to say the least, and it’s going to be interesting to see if the club decide to do anything regarding the German’s action in the future.