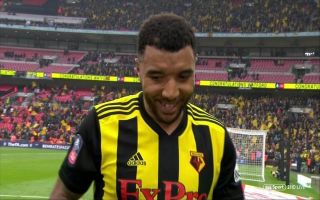 Javi Gracia’s Watford side pulled off a magnificent comeback against Wolves today, a sensational double from super sub Gerard Deulofeu and a last-gasp penalty in stoppage time from captain Troy Deeney was enough for the Hornets to get themselves a place in the FA Cup final against Manchester City.

During his post-game interview with BT Sport, Deeney mentioned that the atmosphere for today’s Semi-Final at Wembley was ‘cracking’ compared to the one at the match between Manchester City and Brighton yesterday.

Check out what Deeney had to say below:

Deeney has come under fire for the way he conducts himself in the past, but everyone should realise that Deeney should be treasured for the kind of player and more importantly leader he is.

The forward gives his all for the Hornets and wears his heart on his sleeve, which has inspired the entire squad to success this season.