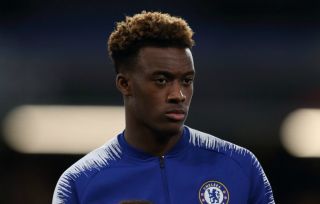 Chelsea have been slammed for their use of Callum Hudson-Odoi this season as pundits Gary Neville and Jamie Carragher discuss if the 18-year-old should leave the club.

In the video clip below from Sky Sports, former Manchester United star Neville says it’s ‘appalling’ that a talent like Hudson-Odoi has only started 14 games for the first-team and Reserves all season long.

? "If I was him I wouldn't sign that new deal…"@Carra23 and @GNev2 look at Callum Hudson-Odoi's situation at Chelsea.

The teenager has already made his full England debut and looks one of the brightest prospects in the country, but Chelsea are not known for putting much emphasis on promoting youth from their academy.

Carragher backs Hudson-Odoi over his contract situation, and Neville also agrees he needs to be playing now to develop, though he’s less sure about getting involved with the distractions of a contract row.

Food for thought for the youngster this summer as speculation continues to mount over his future at Stamford Bridge.