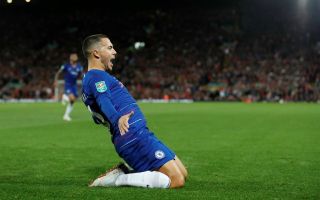 Chelsea star Eden Hazard has supposedly revealed which of his two famous solo goals from this season he prefers.

The Belgium international was in sparkling form against West Ham on Monday night, netting twice in a 2-0 win for Chelsea, with his first up there with the best he’s scored.

Still, it was only a few months ago that Hazard also danced his way through the Liverpool defence at Anfield to score another beauty in a 2-1 victory there in the Carabao Cup.

It’s hard to pick between the two, but Chelsea podcaster Matt Davies-Adams claims he spoke to the Blues front-man after Monday night’s game and got his personal preference.

According to Davies-Adams in the tweet below, Hazard said he preferred the goal against Liverpool, simply because it was against a big team like Liverpool, and at a big stadium at Anfield.

I’ve just asked Eden which he preferred: “Liverpool because it’s Liverpool and it was at Anfield.” Quite right too. https://t.co/zt9JMe68gX

That’s fair enough, we suppose, and for your viewing pleasure, we’ve got both of them for you to watch over and over again below:

Hazard has 5 good games a season! He’s had 4 of them already and the next one will be on Sunday vs @LFC… again ????? pic.twitter.com/0xCn4ij3cZ

Photo: Barcelona appear to leak huge signing as shirts with his name appear for sale on their website
More Stories Eden Hazard