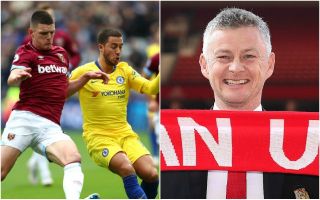 Manchester United can reportedly beat Chelsea to the transfer of West Ham star Declan Rice for just £50million this summer.

The England international has been one of the most impressive young players in the Premier League and indeed Europe this season, and looks set for a big move in the near future.

Chelsea were strongly linked as Rice’s main suitors earlier in the season as the Metro reported they were chasing him to replace midfield flops like Jorginho and Mateo Kovacic.

But it now seems Man Utd look set to swoop into pole position for the talented 20-year-old, with the Irish Independent claiming they’ve been given the green light to snap him up for £50m.

West Ham cannot turn that kind of money down despite their desire to keep Rice, and it’s a perfectly affordable amount to pay for the Red Devils.

Chelsea won’t be happy, but may not be able to sign anyone anyway this summer as they look set to be slapped with a transfer ban.

United, meanwhile, have also been linked with big-name signings in midfield like Adrien Rabiot and Tanguy Ndombele, though Rice could be the best target of the lot.