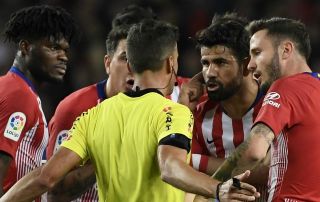 Atletico Madrid striker Diego Costa could reportedly face a ban of as long as 12 games – effectively ruling him out for the rest of the season.

The Spain international made the headlines for all the wrong reasons in Atletico’s defeat to Barcelona, getting himself sent off and allegedly firing some horrific insults at the referee Jesus Gil Manzano.

MORE: Revealed: what Diego Costa said to referee Gil Manzano that lead to sending off in Barcelona vs Atletico Madrid

AS now claim the match official has quoted Costa’s words in his match report, and this could lead to a ban of anywhere between four and 12 games.

This potentially means Costa could miss the rest of the season, with Diego Simeone’s side having just seven games more to play in La Liga, while they’re out of all other competitions.

If Costa does receive a 12-game suspension it could therefore even mean missing the start of next season for Atletico.

The 30-year-old is alleged to have said: ‘I shit on your whore mother’ to Manzano, and is starting to look more trouble than he’s really worth.

While Costa shone in his first spell in Madrid and then at Chelsea, his form has gone majorly downhill this season, with the Spaniard scoring two goals in La Liga, and eight in all competitions in total.

That’s far from what Atletico need from their main centre-forward, and if he’s going to be getting himself into trouble like this and missing loads of games, one wonders if the club will continue to show much patience with him.