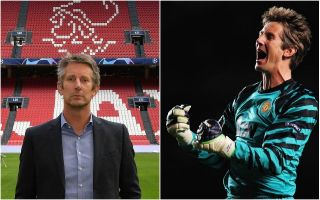 Former Manchester United goalkeeper Edwin van der Sar has revealed that he would be open to a return to the Red Devils in the future, the former star described United as a ‘special place.’

According to The Sun via an interview by The Times (subscription required), Van der Sar would be open to returning to Old Trafford in a director of football role, Van der Sar played for the Red Devils between 2006-2011 and the stopper established himself as one of the best goalkeepers to ever play in the Premier League.

Since calling time on his playing career, Van der Sar has worked his way up the ranks at former club Ajax – the 48-year-old is now the CEO of the Eredivisie giants.

Van der Sar was massively successful with United, the Dutchman is regarded as one of the best goalkeepers in Premier League history.

The Amsterdam club will face-off against Italian giants Juventus in the Quarter-Finals of the competition, the first leg of the clash will be on Wednesday night.

Here’s what Van der Sar had to say on the current mission he’s on with Ajax:

“I’m really happy in Amsterdam and we’re not finished yet.

“Marc (Overmars) always said you want to touch the crossbar.

“What he means is we want to reach a high point and that’s what we want to do for another couple of years.”

This is what the former Ajax, Juventus, Fulham and United stopper had to say on a potential return to Old Trafford:

“United is a much bigger challenge than Ajax.

“They’re not just a big and famous club but also a worldwide brand, yet when you’re inside, it’s still a family place.

“The washing ladies, Mike the chef, Kath (the receptionist), they’re still there.

“You need to cherish that and Ole (Gunnar Solskjaer) is doing a great job at it.”

“Also Ed (Woodward), I have utmost respect for him and what he does for the club so I don’t need to be the big man.

Van der Sar could be a very serious contender for a directorial role at United in the near future if he continues to make waves with Ajax.