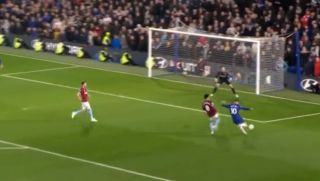 Eden Hazard has done it again for Chelsea, scoring another well-taken goal to make it 2-0 to the Blues against West Ham late on in their Premier League clash at Stamford Bridge.

The Belgian scored an absolute beauty earlier in the game, and did well here to take down Ross Barkley’s pass before steering the ball in, and not from the easiest of angles.

Hazard has been a joy to watch tonight, and the 28-year-old’s two moments of class look to have been enough to settle this match.

With Arsenal losing at the weekend, this is an important result for CFC in the race for this season’s top four.