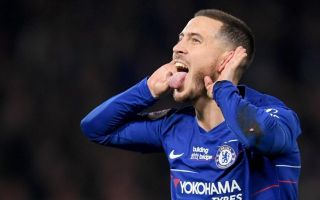 Chelsea star Eden Hazard has equalled his personal best goal telly for the Blues today with his double in the win over West Ham.

The Belgium international scored a memorable solo goal to open the scoring in Monday night’s Premier League clash, and then added another fine finish late on to wrap up the three points.

In doing so, Hazard is now on 19 goals in all competitions this season – his joint-best tally with the club, last achieved in the 2014/15 season.

While this is encouraging for Chelsea as he appears to enter form at just the right time in the season to move them up into third, it’s also a little bittersweet.

Much recent transfer speculation suggests Hazard is nearing an exit from Chelsea this summer, with the 28-year-old due to be out of contract at the end of next season.

The Sun claim Real Madrid are prepared to pay as much as £100million for Hazard, which the Telegraph claim is Chelsea’s asking price for their star player.

As this stat above shows, if Madrid get him, they’re really landing a player at the very top of his game right now.