The 20-year-old – who recently pledged his allegiance to England at international level – has enjoyed a stellar 2018-19 campaign at the London Stadium, helping the Hammers to fight for a place in the top half of the Premier League.

Rice has featured in over 30 matches for West Ham across all competitions this term, emerging as one of English football’s brightest young prospects while also earning a call up to Gareth Southgate’s Three Lions squad.

According to the Irish Independent, his recent displays have attracted the interest of Man United, who are now eager to seal his transfer when the market reopens in May.

The Irish Independent reports that West Ham are only willing to listen to offers within the region of £50 million, but such a fee is unlikely to deter one of Europe’s biggest clubs considering their financial muscle. 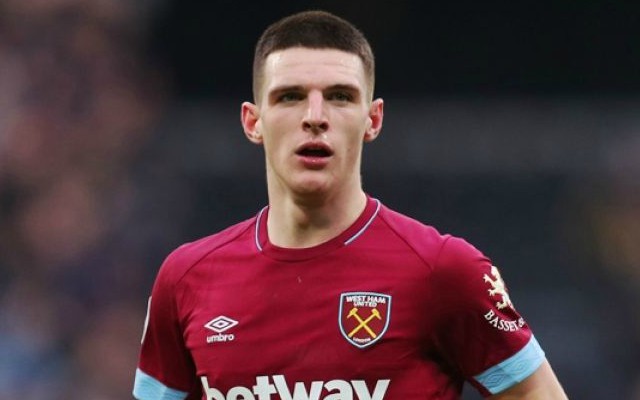 The Red Devils are poised for a summer of wholesale changes, with new boss Ole Gunnar Solskjaer reportedly eyeing a number of targets to bolster his current squad and Rice is near the top of the list.

Given his age and experience in the Premier League, the Hammers ace could slot into Solskjaer’s line up at Old Trafford seamlessly and give United a new dimension across the middle of the park that has been lacking at times this season.

West Ham manager Manuel Pellegrini recently admitted that the club may be forced to sell their most prized asset if a suitable offer is tabled later in the year and United are now thought to be the frontrunners to land his signature – as per the Irish Independent.

Rice has a bright future ahead of him and his skills could develop quickly in Manchester, but it remains to be seen whether or not he is willing to embrace a major step up at this stage of his fledgeling career.