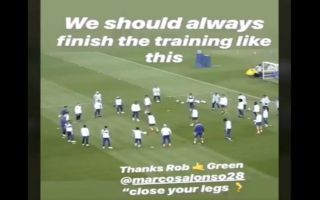 Chelsea goalkeeper Rob Green produced a moment of magic which left Marcos Alonso red-faced in training over the weekend.

The Blues are currently gearing up to face West Ham United in a crucial Premier League fixture at Stamford Bridge on Monday night, as they continue to chase a spot in next season’s Champions League.

The players seem to be in high spirits on the training ground if the video Willy Cabellero uploaded to his Instagram story is anything to go by, as third choice ‘keeper Green was mobbed by his teammates after humiliating Alonso.

The former England star nutmegged the Spaniard superbly after receiving the ball in a circle passing drill, which sent his colleagues into hysterics and led Cabellero to caption the video: “Close your legs”.

Check out the hilarious incident below, via Metro Sport on Twitter.

Only Marcos Alonso could get nutmegged by ROB GREEN ?pic.twitter.com/kWdBYyQDEl