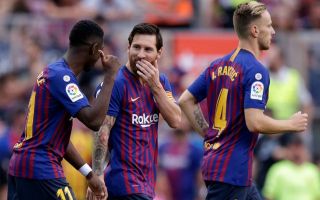 Barcelona have been handed a huge injury boost ahead of their Champions League clash with Manchester United this week as Ousmane Dembele has been given medical clearance to play.

The France international’s availability has been confirmed by Barcelona’s official site, but is undoubtedly a blow for Man Utd’s hopes of getting through this Champions League quarter-final tie.

Dembele has shown himself to be one of the most exciting young attacking players in the world in recent times, and will fancy himself against what has been a pretty shaky United defence for much of this season.

Ole Gunnar Solskjaer’s side did well to get past Paris Saint-Germain in the last round, though they had Neymar missing for both games.

The two teams meet at Old Trafford tomorrow night in what promises to be one of the games of the season in Europe.