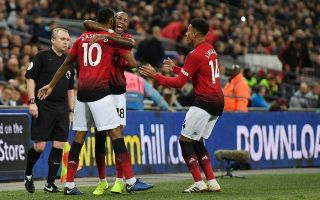 Barcelona have been given a warning of sorts about three Manchester United players that can hurt them in their Champions League clash this week.

The Red Devils host Barca at Old Trafford on Wednesday night, but will certainly not be the big favourites to go through to the semi-finals of this season’s competition.

Still, Barcelona will have to be careful, with club legend Xavi telling the Daily Mirror that their defence is not the best it’s ever been, while Marcus Rashford, Anthony Martial and Romelu Lukaku are Man Utd players who can hurt his old side.

‘This is an area that Manchester United can really cause Barcelona a problem in,’ he said.

‘Lukaku is a big physical threat and then they have then players like Martial and Rashford who have a lot of speed, a lot of quality, and both can get goals.’

It remains to be seen how Ole Gunnar Solskjaer will line up for this one, with Lukaku and Martial not necessarily guaranteed to get starts against Barcelona, though there’s no doubt Xavi has a point about what they could do to the Catalans’ defence.

All three are pacey, strong, and lethal finishers, and could also justifiably claim to be better than many of the forwards Barcelona come up against in La Liga.