Manchester United are reportedly among the clubs in the running to seal the transfer of exciting PSV winger Steven Bergwijn this summer.

The 21-year-old has shown himself to be a top talent in the Eredivisie, with pace and trickery out wide to surely give him a chance of a very successful career at the highest level.

According to the print edition of Corriere dello Sport, as translated by Sport Witness, Man Utd are interested in Bergwijn, who is available for a bargain fee of just £26million this summer. 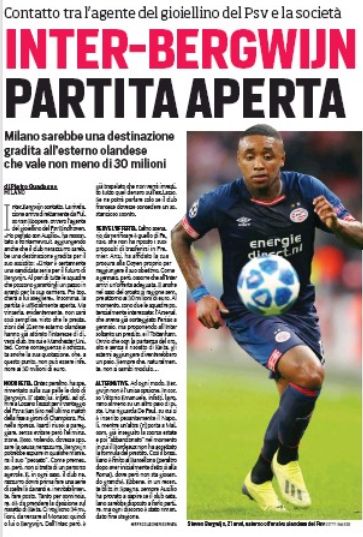 The Red Devils could definitely do with a player like Bergwijn, who looks to have the potential to be an upgrade on Alexis Sanchez, who has struggled in a big way since joining the club from Arsenal last season.

It remains to be seen if United will settle on Bergwijn as their priority target, however, with other names also linked with moves to Old Trafford in recent times.

Bleacher Report recently linked Borussia Dortmund winger Jadon Sancho as a top target for that area of the pitch, while they also claimed Crystal Palace wide-man Wilfried Zaha could be an alternative for United.