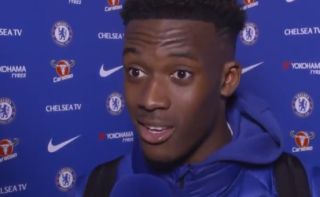 The Belgium international waltzed through the Hammers defence to score one of the goals of the season, and Hudson-Odoi admits his jaw dropped as he watched it.

'My mouth was just like ?! It was crazy.'@Calteck10 saying what we were all thinking after @HazardEden10's opening goal yesterday… pic.twitter.com/8xWWigrEk2

Watch the interview above as the England international cannot hide his admiration of his world class team-mate.

Hudson-Odoi looks a hugely promising talent himself after a fine breakthrough campaign at Stamford Bridge, and fans will be pleased to see he’s enjoying watching and learning from a proven star like Hazard.