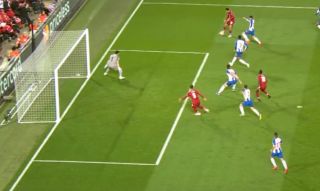 Roberto Firmino’s goal has made it 2-0 to Liverpool as they threaten to run away with it against Porto again tonight as they did last season.

The Reds notably thrashed their Portuguese opponents 5-0 away from home last term, and they’ve already got themselves 2-0 up in the first half this evening.

Watch the goal video above as Firmino taps in after superb play by Jordan Henderson and Trent Alexander-Arnold to tear the Porto defence apart.

It’s early days yet in this tie, but LFC look in a very strong position already to make it into the Champions League semi-finals for the second season in a row.