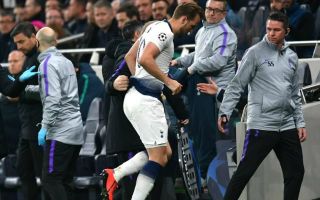 The England international went off injured after a clash with City defender Fabian Delph, and there will now be doubts about whether or not he can play again this season.

It remains to be seen if this just looks worse than it is, but Spurs will undoubtedly be worried by the sight of their star player having to leave on crutches this evening.

Kane has been a lethal goal-scorer for Tottenham in recent seasons and would be a big loss for the club in their hunt for a top four spot and further progression in Europe.