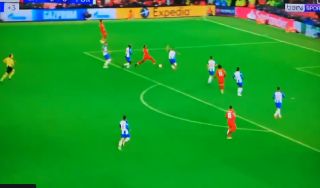 Liverpool star Naby Keita had a superb performance in the Champions League tonight as he shone in the Reds’ 2-0 win over Porto.

The Guinea international has been a little slow to get going at Anfield this season since his summer move from RB Leipzig, but now has two goals in his last two games.

MORE: Video: Mohamed Salah misses a sitter for Liverpool as struggles in front of goal continue

Keita opened the scoring against Porto tonight and helped Liverpool to a hugely important result, with Jurgen Klopp’s men now the big favourites to progress to the semi-finals of this competition for the second year in a row.

As well as his goal, Keita went on a superb solo run late on, taking on almost the entire Porto defence by himself.

What a run by Keita. pic.twitter.com/6SVUWdbPVj

Overall, LFC fans were very happy with the 24-year-old, who certainly looks an immense talent now that he’s settled in England.

Well Naby Keita was like Pogba on meth tonight

Keita is miles above Pogba, deluded if you think otherwise.

Keita MOTM. Really good performance, still holds onto the ball for a little too long at times. His runs, link up/break up play were brilliant for most of the game. Hopefully stays in the side.

Naby Keita with easily one of the best performances of the season for us, unreal

Naby Keita been world class so far, so happy for him