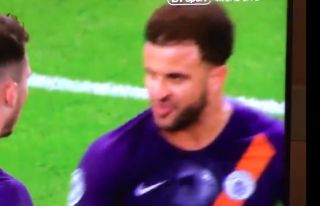 The England international has had his critics over this issue in the past, and seemed to go to ground a little easily again for Spurs tonight.

Now, does he say ‘he’ll dive every time’? #TOTMCI #Alli and what a dive by the way! I’m sure these Sp*rs players practice diving in training. pic.twitter.com/Y41MrTrHjT

Watch the clip above as Walker seems to do the diving motion, while this tweeter points out that it looks like he’s saying “he’ll dive every time” about Alli.

Given that Walker played for Tottenham just a couple of years ago and is still regularly in the England squad alongside Alli, that’s certainly got the potential to get a little awkward.