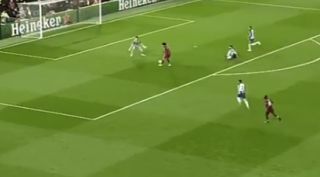 Liverpool star Mohamed Salah missed a golden opportunity against Porto tonight that he would have put away without any fuss last season.

The Egypt international somehow steered his shot wide here after poor defending from Porto allowed him in with a one-on-one with the goalkeeper.

Salah looks to have got caught in two minds here with a weird shot that trickled just wide – which was either a very bad decision by the former Roma man, or a lobbed shot gone wrong.

Either way, Salah’s goal at Southampton remains his only one in his last ten games in all competitions.