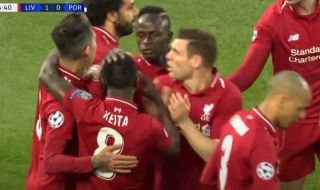 Naby Keita took a while to get going for Liverpool, but he now has two goals in his last two games for the Reds.

Watch the Keita goal video below as Jurgen Klopp’s side go 1-0 up against Porto in their Champions League clash at Anfield tonight.

GOOOOAL, Liverpool scores through Naby Keita. Looks like a small deflection of a Porto player but still a goal. Great start at Anfield for Liverpool. 1-0 in 5 minutes, long game for Porto now. #UCL #LFCFCP

The Guinea international’s shot was deflected past Iker Casillas, but the Liverpool crowd won’t care as they enjoy another classic European night at Anfield.

Liverpool thrashed Porto when they met last season and they’ll be big favourites to go through to the semi-finals of this competition again this term.