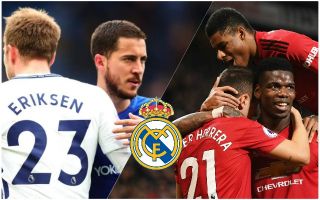 Real Madrid are reportedly expecting to clinch the transfer of Manchester United midfielder Paul Pogba before they even bring in Chelsea’s Eden Hazard.

Speculation surrounding Hazard’s future has been going on for months now, but Pogba’s name has also started to attract attention in the press.

According to Don Balon, it now looks like an agreement is close for the France international to leave Man Utd for Real Madrid this summer, costing roughly £129million.

The Spanish outlet states Pogba has chosen the number 6 shirt at the Bernabeu and is keen on this next step in his career working under French legend Zinedine Zidane.

This move makes sense for Madrid, who look in need of fresh blood in midfield as the likes of Luka Modric and Toni Kroos perhaps now look past their best.

Pogba is one of the very finest in the world in his position on his day, and is also a true Galactico for Real in the sense of being one of the most marketable footballers on the planet.

Losing the 26-year-old would be a big blow for United if this does go through, though Don Balon stress that an agreement between the two clubs has not yet been struck, even if it seems likely to be soon.