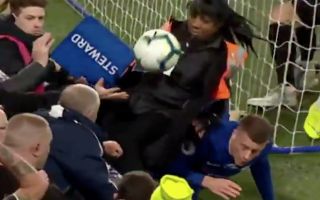 The Blues beat West Ham comfortably on Monday, with a brace from Eden Hazard proving to be difference between the two sides.

Ross Barkley with the tackle of the night ? pic.twitter.com/2rEU4Ws5na

One moment in the match did give fans some comic relief, as Barkley accidentally cleaned out a steward after missing a shot during the second half.

It was a funny moment in a match that was vital for the Blues in their race to qualify for the Champions League next season.

Maybe try doing it on an opponent next time, Ross!

Drunken Chelsea outcast thrown out of restaurant by security