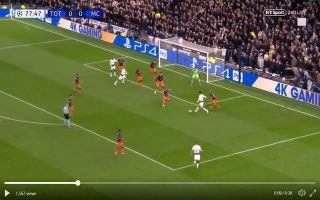 In the 78th minute of the tie, Christian Eriksen played a lovely ball over the top of City’s back-line and deputy left-back Fabian Delph was caught out by Son, the South Korean somehow managed to keep the ball in play.

The former Bayer Leverkusen star then beat Delph with some slick dribbling before firing the ball into the back of the net. It looked as though the ball went just under Ederson’s arm.

Son scores and Spurs take the lead against Manchester City!

Could Son’s moment of magic see Pochettino’s side stun the world and knock Manchester City out of the Champions League.

Son has also etched himself into Spurs’ history books after scoring the first goal at Tottenham’s new stadium in both the Premier League and Champions League.