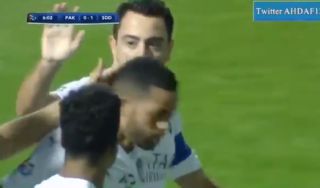 The Spanish veteran, now 39 years old, was long regarded as one of the very finest footballers on the planet for much of his trophy-laden career with Barcelona and at international level.

Well, now he’s doing the business in Qatar as well, with the midfield maestro scoring two beautiful finishes here, which you can watch below.

The first is a perfectly placed finish from the edge of the box, while the second is a vintage long-range free-kick into the top corner.

He may be at the end of his career, but Xavi is still an absolute joy to watch.