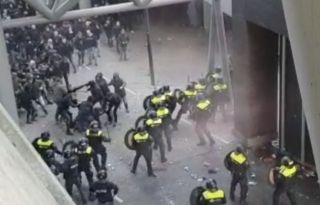 Italian Interior Minister Matteo Salvini has reportedly confirmed that 120 Juventus fans were stopped from entering the stadium for the clash with Ajax.

The two European giants clash in the first leg of their Champions League quarter-final tie on Wednesday night in Amsterdam after seeing off the Madrid clubs in the last round.

However, according to Tuttosport, 120 Juventus fans will not be in the stadium to watch the game, as it’s been reported by Salvini that they were arrested by the authorities for carrying “objects that were not exactly appropriate for going to a stadium”.

Further, as noted in the tweet below from Sky Sport Italia, there was reportedly clashes between Ajax and the police ahead of the game too, as they claim that water cannons and tear gas were used to control the crowds.

Journalist Gianluca Di Marzio posted a video clip of the clash, with things seemingly turning ugly outside the stadium, while further videos were posted as seen below.

It’s hardly what we want to see ahead of such a potentially great game, as matters on the pitch during the 90 minutes will hopefully overshadow the events off it.

Nevertheless, the authorities would undoubtedly have preferred to avoid such clashes, and it’s just hoped that there aren’t similar scenes later in the night after the encounter.