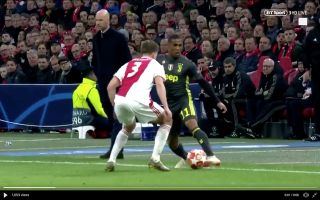 Juventus winger Douglas Costa bamboozled one of Ajax’s defenders tonight with a magical piece of skill, the Brazilian star showed why he’s one of the best dribblers in the world.

In the late stages of this evening’s 1-1 draw, the 28-year-old picked up the ball on the left-wing and tricked Ajax defender Joel Veltman into thinking that he was going down the wing before expertly dropping his shoulder and pulling off an insane elastico nutmeg to get past his man.

Veltman won’t be looking forward to facing the Brazilian in the second-leg of the tie after this, that’s for sure.

Check out the sensational piece of skill below:

Costa is one of the most exciting dribblers in the world.

Brazilian giant hopes Juventus will allow ace to depart as they try and complete transfer May 18 2021, 8:08
Bayern Munich

Brazilian giant has eyes on Juventus ace who hopes to terminate his contract with Bayern Munich stay unlikely May 12 2021, 21:29
Bayern Munich