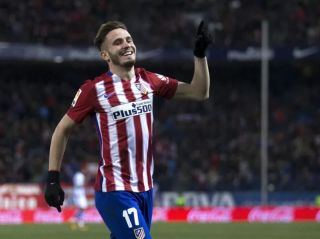 Atletico Madrid are reportedly expecting a contract decision from Saul Niguez amid reports of interest from Man Utd, Man City and Barcelona.

The 24-year-old has established himself as a fundamental figure in Diego Simeone’s plans at the Wanda Metropolitano, coming through the youth ranks to make over 200 appearances for the senior side since making his breakthrough in 2011.

Niguez has scored six goals and provided three assists in 39 outings this season, reiterating just how important he is to Atleti.

However, as reported by AS, it’s suggested that the club are waiting on a contract decision from him after opening up the possibility of discussing new terms with him ‘a few weeks ago’.

Man Utd, Man City and Barcelona are specifically all mentioned as interested parties, and so that will undoubtedly concern Atleti even more as they will be desperate to avoid a scenario in which they lose their prized asset, albeit it’s added that he does have a €150m release clause.

Whether or not that trio of European giants is willing to splash out that much on him is another debate, and Atleti don’t seem to be in any immediate danger given Niguez’s current contract runs until 2026.

In turn, while it’s not a decisive decision that they’re waiting for in terms of whether Niguez wants to pen a new deal or not, it would certainly be a fresh sign that he intends on staying in the Spanish capital and will ignore the touted interest from around Europe.

Time will tell if an agreement is reached, but if that fails to happen, then it remains to be seen if his release clause will be activated with United and City certainly in need of midfield reinforcements this summer given the lack of quality depth at each club.

Fernandinho turns 34 next month while question marks have been raised over Ilkay Gundogan’s future at the club, as per Goal.com.

As for United, Ander Herrera will see his current contract expire this summer, leaving Ole Gunnar Solskjaer with Paul Pogba, Nemanja Matic, Fred and Scott McTominay as his midfield options.

With that in mind, Niguez would surely be a welcome addition on either side of Manchester.