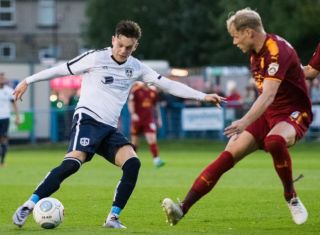 Reece Thompson has been jailed for 40 months and has received a 10-year restraining order after pleading guilty to charges of ABH, GBH and damaging property.

As reported by The Mirror, it’s been claimed by the victim that Thompson forced her to lick paint, rubbed broken glass on her skin and hit her with an iron bar during a three-day ordeal.

After pleading guilty to the charges against him, Thompson has received a lengthy jail sentence as details of the injuries sustained by the victim have been made public by her.

“Reece repeatedly hit me,” she is quoted as saying.

“He hit me with an iron bar, broke my jaw and smashed a mirror over my head.

“I was made to lick paint up off the floor and then he smashed another mirror over my head.

“It was when he picked up the second mirror that I thought I was going to die, I screamed for him to stop or he would kill me.

“He told me to get my arms down and take the beating like a real person.”

Thompson, 25, had spells with Lincoln City, Retford United, York City, Guiseley and Boston United, but his career is undoubtedly now in tatters as few would argue that he has a future in the game after this horrendous case.