Liverpool boss Jurgen Klopp has apologised to Jordan Henderson after seeing him flourish in a more advanced role in recent weeks.

The England midfielder was deployed further up the pitch against Porto in the Champions League on Tuesday night, after a goalscoring cameo in the same position during a 3-1 win at Southampton last Friday.

The 28-year-old was superb in a 2-0 win at Anfield over the Portuguese giants, leading by example as captain and playing a vital role in teeing up Roberto Firmino for the second goal of the game.

Klopp has always used Henderson as a deep-lying midfielder – the man who sits in front of the back four and breaks up the play while providing a link to the team’s more creative players in the middle of the park.

Here’s 5?? talking points from our win over @FCPorto, including Anfield’s adoration of Bobby Firmino ? https://t.co/If5Pkp7jQf

However, recent evidence has shown that he can also contribute a great deal in attack and Klopp apologised after the Porto clash for failing to find his best position until now.

“Hendo’s a brilliant player,” the Liverpool manager began – as per The Independent. “I’m really happy that he can show that again. He likes the position obviously.

“It was my fault that for one-and-a-half years he played as a No 6. Sorry for that! But we needed him there. 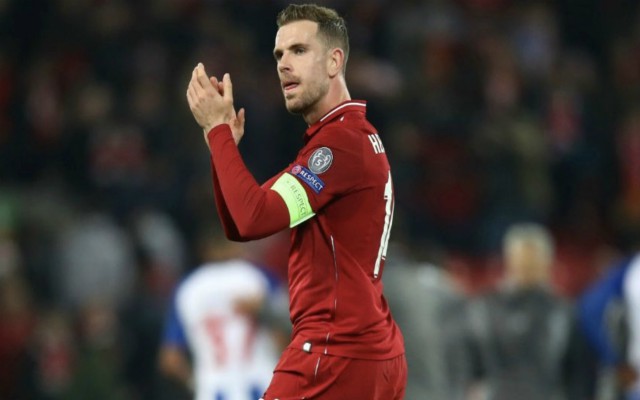 “It was a really good performance. The second goal was brilliant, but I think he had the cross for Sadio’s [disallowed]  ‘goal’ as well. It was a brilliant cross. I like that.”

The Reds are now in pole position to qualify for the semifinals of the Champions League, where they could meet the winners of a clash between Manchester United and Barcelona.

Henderson has featured in 36 matches across all competitions and his continued presence in the starting XI will be vital to Liverpool’s chances of success, with a Premier League title race to negotiate additionally between now and May.

For now, the England international might have to remain in his familiar holding role, but now that he has proved himself as an effective forward-thinking player, Klopp may yet grant him extra opportunities to improve his overall goal and assists numbers for the team.