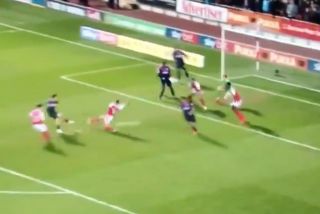 Jack Grealish produced a moment of absolute quality to give Aston Villa the lead at Rotherham on Wednesday night.

Dean Smith’s side are chasing a Championship playoff spot to keep their promotion hopes alive this season, and they have been in fine form in recent weeks having rattled off six consecutive wins.

Despite falling behind and seeing Tyrone Mings sent off in the first half against Rotherham, they came storming back after the break to turn it around and take the lead.

As seen in the video below, Grealish picked the ball up at the halfway line and after playing a key role in the build-up to the attack, he was on hand to receive the ball back in the box and produced a quality finish to put Villa ahead.

Should Smith’s men hold on for all three points, that would move them back up into fifth place, five points clear of seventh as it looks as though their late charge could secure a playoff spot.

It certainly looks as though Grealish is in the mood, as the 23-year-old produced yet another magical moment to showcase his talent.