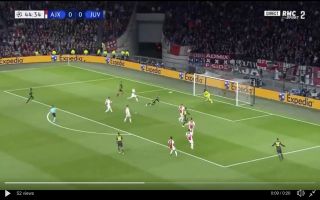 Juventus superstar Cristiano Ronaldo produced a moment of magic right on the brink of halftime, in order for Juventus to break the deadlock against Ajax in the first-leg of their Champions League clash.

Ronaldo’s compatriot, Joao Cancelo, floated an inch-perfect cross into the box and Ajax made the mistake of leaving the five-time Ballon d’Or winner unmarked. You’d think a player who has just returned from an injury would be reluctant to throw themselves in the air, but Ronaldo did just that.

The star’s diving header was sensational.

Check out the superstar’s goal below:

"He is a flying phenomenon!"

"He is the King of Europe!"

Incredible. What a header! ? pic.twitter.com/8fWe016yJK